On 21 March 2022, EU leaders adopted the EU Strategic Compass, an action plan for the next 5-10 years aimed at strengthening EU defence cooperation.

Putin’s decision to invade Ukraine and the return of war to the European continent served to sharpen the needle of this Compass. In recent days, we saw the horrific images and reports from Bucha and Irpin. Atrocities committed against the innocent people of Ukraine. War crimes must be documented and investigated so that those responsible can be held accountable.

The Strategic Compass will point us to a future that ensures the freedom of our open, democratic societies; the soft powers that make us who we are. However, in order to protect our values and our security, we also need hard power. As the ministers of defence of Belgium, Luxemburg and the Netherlands, we are committed to taking European defence cooperation to the next level.

At an unprecedented pace, the EU is enhancing defence cooperation and bringing multiple assets to the table to complement NATO’s capabilities. The EU has various funds, totalling close to 15 billion euros, for the purpose of stimulating the joint development of capabilities, investing in military mobility, financing the provision of weapons to partner countries, and enhancing stability through crisis management and training missions.

And this is just the start. Together, we will invest more heavily in defence capabilities, strengthen our resilience against cyber and hybrid threats, and reinforce our capacity to act in crisis situations and in countering security risks stemming from global environmental change, such as climate change. This will improve the European contribution to the transatlantic Alliance and thus strengthen NATO, which remains the foundation of our collective defence. It will also reinforce the EU’s ability to act independently when necessary, especially when it comes to crisis management in our own neighbourhood.

EU member states will set up a Rapid Deployment Capacity (RDC), numbering 5,000 military personnel, that can be used for evacuation and stabilisation operations. In 2025, Germany will be the lead nation of this force. Luxembourg will provide satellite communications and space surveillance, and the Netherlands will contribute a 150-strong manoeuvre unit that operates with Boxer fighting vehicles, including its own medical support capability. In 2024, Belgium will participate in EU battlegroups, which serve as the basis for this rapid deployment capacity. It is also considering contributing niche capabilities to the RDC in 2025. The EU will also strengthen its military headquarters in Brussels, as proper command and control is vital in planning and conducting EU military operations.

The one year-old European Peace Facility enables the EU to finance the provision of equipment and weapons to partner countries. In total, 20% of its 5 billion euro budget has been used to finance the delivery of weapons and other aid to Ukraine, which will allow its army to better defend the country against the Russian aggression.

The 8 billion euro European Defence Fund is used to encourage member states and defence industries to work together more closely in developing and procuring defence capabilities. In this way, we can join forces in terms of financial resources and improve our interoperability in operations. The recent decision taken by many European countries to increase their defence expenditure should encourage us to seek more cooperation in this area. Because we do not only need more from Europe, we need a stronger Europe.

Belgium, Luxembourg and the Netherlands have a good track record in practical defence cooperation, which benefits both the EU and NATO. The Dutch and Belgian navies have undertaken intensive cooperation since 1948; our operational navy staffs are integrated in the Admiralty Benelux. We work together in training military personnel and procuring and maintaining our ships, and are logistically intertwined. Belgium and the Netherlands are jointly procuring new frigates and mine countermeasures vessels. Furthermore, Belgium, Luxembourg and the Netherlands will jointly procure, maintain and operate reconnaissance drones.

The Benelux countries share aircraft and flying hours in NATO’s multinational MRTT (Multi Role Tanker Transport) unit. Belgium and Luxembourg jointly operate a fleet of eight transport aircraft, thus contributing a key capability in the area of strategic airlift and military mobility. These capabilities allowed us to evacuate many of our citizens as well as Afghan nationals from Kabul in August of last year.

As part of NATO Air Policing, Belgium and the Netherlands also monitor the Benelux airspace together. In November, Belgian fighter jets were scrambled to intercept two Russian bombers flying over the North Sea region that were being monitored by the Dutch.

Our bilateral and trilateral cooperation has been diverse, longstanding and is based on a deep level of trust. We hope that it can serve as an example for EU military cooperation on a bigger scale.

Putin has achieved the opposite of his aim to divide the EU and NATO. His decision to invade Ukraine has worked as a turbocharger for European cohesion. We have become more united and more decisive, with a stronger focus on our collective interests, both within the EU and NATO. In terms of EU defence, the Strategic Compass will pave the way and, as Benelux countries, we are fully committed to playing our part and to putting the resulting plans into action.

The FPS Chancellery of the Prime Minister uses cookies to ensure the proper functioning of this site.

To improve your visit, we also use optional cookies that you can accept or decline. More information can be found on our "personal data protection" page.

No, I refuse
Yes, I accept
Previous article 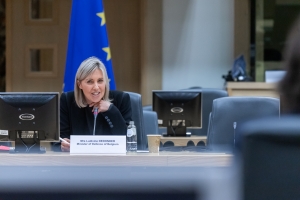 Belgian Seminar on the Strategic Compass 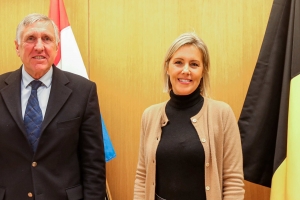